We didn’t plan our first day here, as we knew we’d be exhausted, but after our five hour post-plane nap, we decided to walk the seven minutes and find ourselves in a half hour line-up for the Anne Frank huis.

Anne Frank huis had an unassuming exterior. I’d easily walk by if it weren’t for the half hour line turning the corner round the back. It was covered in modern black shutters. 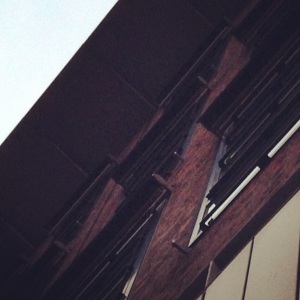 The lower level appeared to be a modern art gallery. 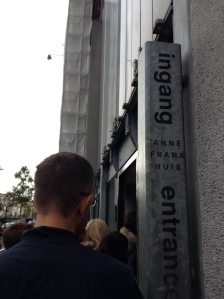 Just across the side street is the bell tower that Anne writes of in her diary, and a canal view out front.

I would have been happy to discover that free WiFi was available for the duration of my wait; however, the sign was only at the entrance, along with the “no photography” sign. Lighting wouldn’t have allowed the place to shine brightly in my personal history books anyway, so I’ll let its world presence shine brightly itself.

If I can describe this apartment with one word, I would say “dank”. You know the word that means dark, dreary, with heavy metal shutters, disallowing light from entering the room. When Anne said she missed the outdoors, she didn’t exaggerate. Though she could enjoy the morning light in the tiny attic above.

There were nine foot ceilings, but touching the marble counter and sink with its wall faucet, I imagined the potatoes and year old kale being prepared for lunch and imagine Mrs. Van Dam complaining about her sore shoulder, again, and I would want to get out of there. Or at least make sounds. I could tiptoe to the rectangular bathroom or waft up the steep staircase to my room on the second floor, maybe make friends with Peter or hope to perfectly conjugate my latin verbs for the latin teacher outside these walls, but I would have no companion, other than my written words.

Anne, strong-minded, confident, sassy, filled with opinions and words, and most certainly, idealistic about the future, reminds me of my thirteen year old daughter. Anne declared, “I know what I want. I have a goal. I have opinions. A religion and love.” Written April 11, 1944

She aspired to being a journalist, a well-known writer. Only her father, Otto, would see her dream to fruition. She died of Typhus in the Bergen-Belsen Concentration Camp in Germany just a month before the war was over. The Russians battled against the Germans only 120 miles away.

On our trip to the Venice Jewish Ghetto last autumn, we picked up her unedited book; we voraciously read a teenage diary of a girl–not a diary of a wimpy kid. She was a girl with boys on her mind, with annoyance in her housemates, with plans for her future, and certainly, a way with words.

Hannah and I chose a couple books from the Anne Frank bookshop about her life: “anne frank: the Anne Frank House authorized graphic biography”…cartoon Anne Frank for our littles. And “The Last Seven Months of Anne Frank—the Stories of six women who knew Anne Frank” by Willy Lindwer.

Afterward, we stopped at the Pancake Bakery for dinner…a no-go-zone for gluten haters. Gigantic crepes with ethnic fillings, the Canadian (bacon and eggs, maple syrup and sausage—might be all jammed together, but yup, that’s Canadian), the Indonesian (sounded interesting, but not in a pancake), the French (Nutella with fruit, yum, always), the Norweigan (we adults tried that one: sour cream, cream cheese and fresh salmon, uh yeah!)

And back to the apartment for a little family reading, and an attempt at finding the heat in this near-wintery cold, Ikea showplace.

When chatting with Zach on his bed at bedtime, he asked, “Why did the Yahtzees want to kill the Jews?” Besides power, greed, and a penchant for evil, I wouldn’t really know. As we return to the Netherlands and venture into Belgium, we’ll do a little more World War study after our Ghana trip.

It is now 1:31 am. Amsterdam time anyway. I’ve lost track of home time. And am lost in the “I have no idea what time it is but I want to eat all the time, go to sleep for two hour periods, and gees, I sound like I’m living on newborn time”.

I’ll soak this place up. Stare into its damp pre-winter chills. Savour the hourly clock tower chimes. And listen to slices of gouda being cut from the round. Yes, with jetlag my senses are askew, but I’m readily taking in the views.

Holding to our Homeschool Vision & Maintaining Authenticity & Vulnerability in our Relationships

a Letter to My Homeschool Graduated, College-bound Daughter

Three Things I Wish I Knew Before I Homeschooled

what are my top 5 summer faves

How to Plan for your Upcoming Homeschool